McQueen has always been a designer whose concepts and imagery have courted media controversy. Sometimes (especially with the provocative imagery at the start of his career) this controversy is deliberate but this A/W 1995 collection, entitled ‘Highland Rape’ (see the full show here), is possibly the best example of McQueen’s vision being misinterpreted and sensationalised by the media. Upon seeing the collection, journalists clambered over each other to be the first to denounce the designer as a ‘misogynist’ – an insensitive idiot glorifying rape to gain media coverage. The backlash was enormous, and it was only when the designer began to give interviews on the collection’s real meaning that the press began to thaw. The collection was not a testament to rape – instead it was a visual commentary on England’s violation of Scotland. 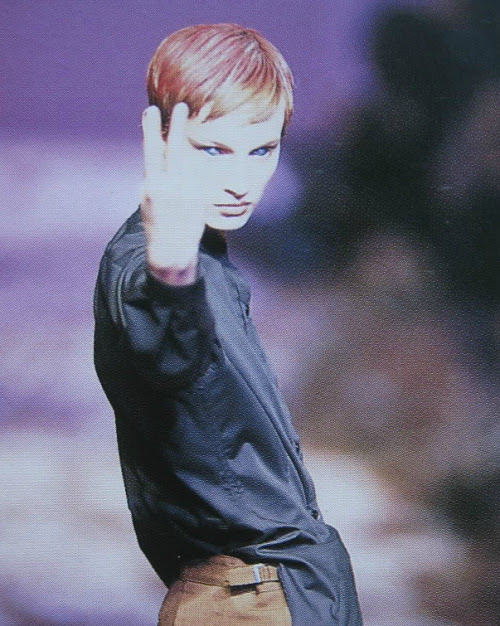 It wasn’t the first time that the designer had used shock tactics to captivate his audience but it was arguably the most effective; the collection is often hailed as McQueen’s ‘breakthrough’ and one that cemented his reputation as fashion’s ‘enfant terrible’. Whilst many criticised him by claiming style over substance, it would appear that this criticism stemmed only from the spectacular runway shows that were fast becoming a trademark. One look at the clothes themselves reveals a huge amount of versatility – from blue latex bumsters and ripped tartan gowns through to turquoise lace dresses and tailored pencil skirts, the collection itself was a perfect example of McQueen’s versatility as a designer. 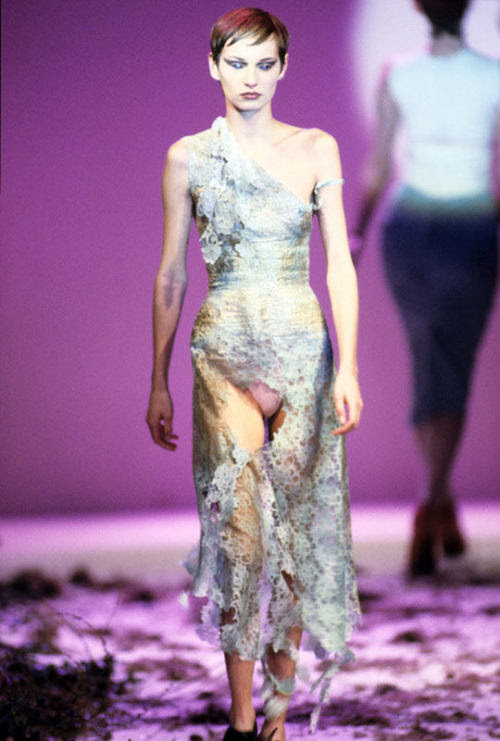 There were also several references to McQueen’s own Scottish heritage, references which were frequent but managed to stay on the right side of cliché. Of course there was tartan aplenty and the obligatory argyle socks, but the aesthetic was far from traditional. One of my personal favourite looks was a tartan lace-up top with a black back, teamed with a voluminous full skirt made from what appeared to be slashed green rubber, whereas another model wore a black top accessorised with a tartan ruff.


The show finale was also typically McQueen in its drama and symbolism. Two models walked the runway consecutively – the first wore a cropped black top, exposing both her midriff and the full extent of her ‘bumsters’ and from the collar of her top protruded an array of feathers which almost entirely obscured her face. She was aggressive, she was enigmatic and she was confident. The second woman wore a black form-fitting dress that grazed knee-length – it was the atypical ‘LBD’, in some ways the epitome of femininity. However, the dress was ripped open at the chest revealing her entire left breast and she stumbled down the runway feebly trying to retain her modesty as the steely model in the feathers looked on menacingly from the end of the runway. The imagery was obvious – the first model represented England, the latter represented a Scotland that had been shaken to its core but the imagery was also provocative, memorable and – as critics’ responses showed, universal. The beauty of McQueen is that he manages to take obscure or personal concepts and present them using imagery that can be interpreted in many different ways, inviting the audience to form their own opinions. 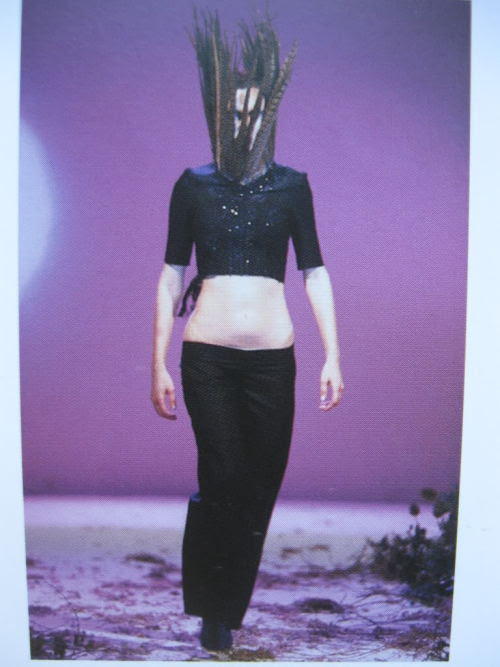 In essence, any McQueen show is essentially theatre and the models themselves oozed personality; looking either battered and dishevelled or snarly and pissed-off, it was clear that the models were part of the casting process as opposed to faceless clothes-horses (a worrying custom in the fashion industry). With long, matted hair and relatively little make-up, there was little to distract from the clothes themselves apart from the glaring neon-blue contact lenses that pierced the eyes of the front row. The defiant stance and aggressive nature of the models seem to be the perfect embodiment of McQueen’s relationship with the press at the time – he saw the headlines, he registered the information, he remained unfazed. 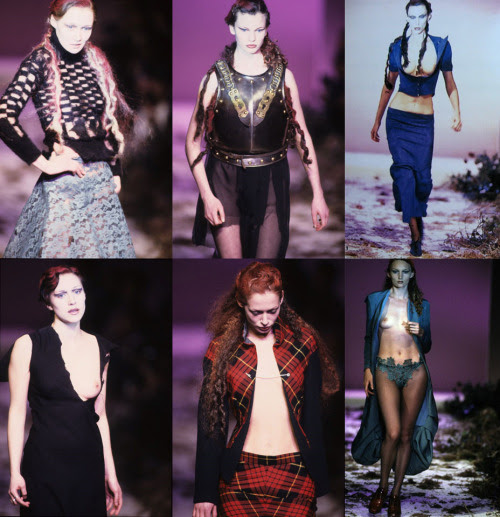